On the streets of equality 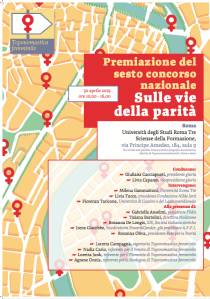 The 6th edition of the national competition ” On the streets of equality” is aimed at promoting local historical research in schools of all levels and restoring visibility to women who have distinguished themselves for their literary, artistic and scientific activity, for humanitarian and social commitment or other merits. A prize-giving ceremony was organized on 30 April in Rome.

Toponomastica Femminile (Female toponymy) was born on Facebook in January 2012 with the idea of setting up research, publishing data and putting pressure on every single territory so that streets, squares, gardens and urban places in a broad sense, are dedicated to women to compensate for the obvious sexism that characterizes the current status.

The main objective of the group, which now has over 9,000 participants and forms an association, is to spread gender culture, to give visibility to women who have contributed, in all fields, to improving society.

From the national census conducted by the group, it appears that the average number of roads named after women ranges from 3 to 5% (mainly Madonnas and saints), while that of the roads dedicated to men is around 40%. From the observation of this gap many initiatives have started: the campaign for women’s memory called “8 March 3 women 3 streets”, with the invitation to mayors and mayors to name three roads for as many women, one of local importance, one of relevance national, a foreigner; the projects “Largo alle Costituenti” and “Partigiane in città” which reported biographies of courageous and tenacious women; the campaigns “A road for Miriam”, “The long road of Rita”, “A Margherita on our streets” and “A scene for Franca”, after the disappearance of authoritative figures of Italian culture, science and politics.

Numerous educational projects promoted and coordinated by the group are aimed at young students offering them valuable models to inspire in the delicate phase of building their identity.

The association organizes photographic and documentary, thematic, versatile and itinerant exhibitions throughout Italy: “Women and work”, for the first time exposed in Rome at the Centrale Montemartini, touched almost all the Italian regions, enriching itself with each step. Images converge on the theme of female work between past and present, documents, vintage photos, current photos. The panels want to solicit a reflection on the feminine commitment, constantly present, although in different forms, and in continuous evolution.

The exhibition “The Mothers of the Republic” recalls, 70 years after the entry into force of the Constitution, the contribution of the twenty women present in the Constituent Assembly. “Women of pen and thought” combines the toponymic exposure of streets dedicated to writers and poets to “Letture d’autrice”, literary salons held in public spaces (libraries, museums, bookshops) and open to the direct participation of students and citizens.

The last “Camera d’autrice” initiative is aimed at hotel managers and directors who share the themes of equal opportunities and intend to enhance the feminine genius: their task is to name one of the rooms to a writer, or an artist , preferably connected to the territory. The guests will find inside the room books, photos and references to the figure and work of the chosen author.

This site collects research and actions of the association already discussed on the fb Toponymy female page.

For any information, curiosity, suggestions, to associate and collaborate, please contact them : toponomasticafemminile@gmail.com

Thanks FILDIS Italy for sharing this interesting information with us.

This entry was posted in Uncategorized and tagged Female toponymy, On the streets of equality, Toponomastica Femminile.