The European elections are coming up. Time to realize women represent only 35% in EU parliament. Time for change. More figures? http://paritydemocracy.eu/

The Lobbying Kit, published around 2 months ago in the framework of the 50/50 Campaign, is now available on the campaign website in 6 different languages. In addition to the French and English version, you can now use it in Greek, Lithuanian, Czech and Romanian.

The Lobbying Kit is aimed helping national (women’s rights) organisations and dedicated individuals in their demand to ensure the equal representation of women and men in political decision-making ahead of the coming European elections. It provides arguments to show why parity democracy is important for all of us and model lobbying letters in order to address national political parties, heads of governments and prominent supporters.

This entry was posted in actions and tagged Gender Gap statistics, Lobby kit.

Iceland has been named the country with the narrowest gender gap in the world by the World economic Forum. See how countries compare on the gender gap index 2013 • Get the data • Explore the interactive

Iceland is the country with the narrowest gender gap in the world according to the World Economic Forum’s gender gap index. Photograph: © Jose Fuste Raga/CORBIS

Iceland has been named the country with the narrowest gender gap in the world, for the fifth consecutive year, by the World Economic Forum (WEF). The annual gender gap index places Iceland in first place with Finland following in second.

According to the report, Iceland’s overall score was strengthened due to improvements in the ‘economic participation and opportunity’ and the ‘political empowerment’ subindexes whereas Finland held onto second place despite slight losses in its overall score due to a decrease in its ‘economic participation and opportunity’ score.

The UK ranks 18 out of 136 countries –  the same position as last year. The WEF stress that this “highlights some important points that the UK must address if it is to truly tackle its gender gap as there are worrisome points across all four pillars.” Overall the UK is given a score of 0.744, putting it above Austria, Canada and Luxembourg but below Cuba, Lesotho and South Africa. Of the four pillars used for assessment, the UK is ranked 29th for political empowerment, 31st for educational attainment, 35th for economic participation and opportunity and 92nd for health and survival.

Regional performance on the overall index score and by subindexes is also covered in the report. In the overall index score, North America takes first position having closed 74% of its gender gap according to the WEF. The Middle East and North Africa region take last place having closed almost 59% of its gender gap. If you look at regional performance across the four indicators then North America comes top for economic participation and opportunity, educational attainment and health and survival. Asia and the Pacific, however, lead the way in the political empowerment subindex according to the latest release.

The table below shows how each country is ranked in the 2013 gender gap index overall and by subindex. The downloadable spreadsheet has data over time and regional breakdowns. For methodology of the index visit the WEF website.

Data journalism and data visualisations from the Guardian

• Search the world’s global development data with our gateway

This entry was posted in Uncategorized and tagged Gender Gap statistics.

The Global Gender Gap Report 2013 benchmarks national gender gaps of 136 countries on economic, political, education- and health-based criteria. The Global Gender Gap Index was developed in 2006, partially to address the need for a consistent and comprehensive measure of gender equality that can track a country’s progress over time. The index points to potential role models by revealing those countries that – within their region or income group – are leaders in dividing resources more equitably between women and men than other countries, regardless of the overall level of resources available. The Global Gender Gap Report 2013 is published by the World Economic Forum in collaboration with Harvard University and the University of California, Berkeley.
The Report emphasizes persisting gender gap divides across and within regions. “No single measure can capture the complete situation of half of the world’s population. The Global Gender Gap Index seeks to measure one important aspect of gender equality: the relative gaps between women and men, across a large set of countries and across four key areas: health, education, economics and politics. “ 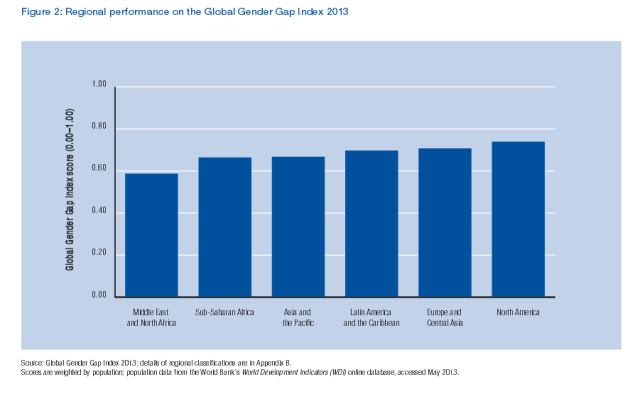 The Global Gender Report 2013 contains a set of five Appendixes which cover a variety of topics from the tracking of the Gender Gap over time to a set of Policy Frameworks for Gender Equality. It also provides a list of country profiles, with detailed analysis of each individual situation.

This entry was posted in Uncategorized and tagged Gender Gap statistics.