Annual Report of the Italian Federation of Graduate Women

FILDIS – Italian Federation of Graduate Women was established in Rome 98 years ago in 1922 under the Presidency of philosophy Isabella Grassi, whose Diaries (1920-21) edited by Fiorenza Taricone, were published in2000. Isabella firmly believed that personal commitment, even of breath international within associations “elevated women culturally, socially and spiritually”. It is present on the national territory with 12 local FILDIS sections. It suspended herself from 1935 to 1944 due to disagreements with the fascist government, to resume her journey in 1945 under the guidance of Prof. Libera Trevisani Levi Civita.

Since 1994, the Pavia section has edited the magazine “Storia donna”. For its 90th anniversary, the Foundation was awarded a special medal by the President of the Italian Republic Giorgio Napolitanos a member of the Lazio Regional Women’s Council, the Equality Network, the CNDI and therefore of its Lazio Regional Coordination, collaborates with other women’s associations that also operate at national and international level and with the “Female Toponymy”. Association is included in the Permanent Workshop: “The Historical City from a Gender Point of View”

From 7 December 2019 the registered office is in Syracuse. We thus wish to mark a new and renewed beginning of our activities, all aimed at the social, cultural and professional promotion of women “above any question of race, language, religion or political opinion”, so that they can best express their talents.
The strengths of our actions are hospitality, solidarity and friendship, which allow us to continue to promote collaboration between women, graduates and not, from all over the world but also with women’s associations or social commitment that cooperate with African and / or Latin American countries, taking care of the formation of groups of volunteers.
We maintain systematic relationships with associations that are committed to the recognition of women in power management roles. Every year, by statute, we are committed to carrying out the FEDERAL COUNCIL – meeting of all the Presidents of the local sections and of the National Past Presidents. On this occasion we organize at least one conference which is held in turn in the cities where there is a local office.

Competitions, conferences and initiatives organized and / or sponsored and organized by FILDIS: 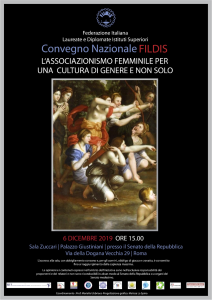 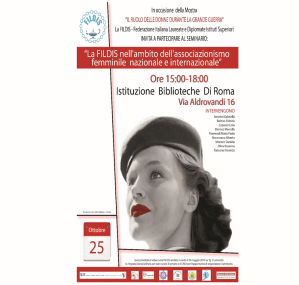 This entry was posted in Uncategorized and tagged Annual Report, Fildis, Italian Federation of Graduate Women.