Reflections of CSW61 by Marita Salo, CIR of Finnish Federation of Graduate Women

The sixty-first session of the Commission on the Status of Women took place at the United Nations Headquarters in New York from 13 to 24 March 2017 and I had the opportunity to participate the event during the first week as an advisor to the Finnish delegation. CSW is the second largest event at the UN and it shows – the event gathers thousands of participants all over the world. During these two weeks the huge UN headquarter building looks very much like a global village run by women.  The general discussion is held in the huge General Assembly Hall that you can recognise from news clips. At the same time, the numerous conference rooms of the UN building are full of side events organised by permanent missions and UN entities. In addition to that, NGOs are organising parallel events outside the UN premises.

The Finnish delegation started each day with a morning briefing and that was an excellent opportunity to learn the highlights of the previous day, allocate the most important events between the participants and get to know the special interests of the other members. That enabled efficient coverage of the most important events with the resources at hand. It was interesting to note that many countries seemed to have sizeable delegations with numerous NGO representatives.

It has to be said that sitting in the General Assembly Hall was impressive as you can see the signs of more than 190 member states and their delegates sitting behind the desks. It is a unique space with an universal atmosphere that is difficult to describe as any word seems inadequate. We heard carefully drafted speeches and also some dramatic ones. It is fascinating that somehow cultural stereotypes become alive and walk along the long corridors of the complex UN building. 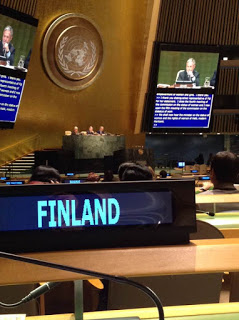 As a first-timer I missed a couple of interesting events because the conference rooms were full in just minutes and the Finnish generally accepted queuing model did not apply. It was easy to get sympathy from the Britons in this issue. Fortunately, the offering of different events was endless – if only you were able to find your way to the right place. Luckily the security guards were everywhere and able to answer any question with clear instructions.

Finnish Federation of Graduate Women (FFGW) has been the coordinator of the organising parties behind the International Helvi Sipilä seminar since 2006. The topic of the 12th seminar organised on 16th  March 2017 was Empowered Futures – Sustainable Economies.  The seminar was opened by the Finnish Minister of Social Affairs and Health, Pirkko Mattila followed by prominent speakers such as Senior Research Scientist Sari Pekkala Kerr from Wellesley College, General Secretary Malayah Harper from World YWCA and Programme Specialist Nancy Khweiss from Fund for Gender Equality, UN Women. The seminar was chaired by Eva Biaudet, a member of Parliament and President of the National Council of Women Finland. We had full house in spite of having the last session of the day and the instant feedback from the crowd and the speakers was very positive.

During the week I was happy to meet some other members of the  “Graduate Women family” and we had interesting discussions concluded with promises to keep in touch and to meet again soon. Next chance will be in Graz, Austria in August this year.

When you attend dozens of events during one week, the ones with something unique stand out from the crowd. During this week, my personal list includes the opening speech of General Secretary António Guterras that was impressive and carefully crafted, the discussion forum with Dr. Hanan Ashrawi who was inspiring and articulate and the brilliant presentation by Sari Pekkala Kerr who made the Finnish audience extremely proud.

The week at CSW61 gave a new perspective and context not only to my pro bono work but also to my daily work. The challenges and obstacles women face in different corners of the world are quite different on the surface but still they all boil down to the lack of equality and lack of equal opportunity. 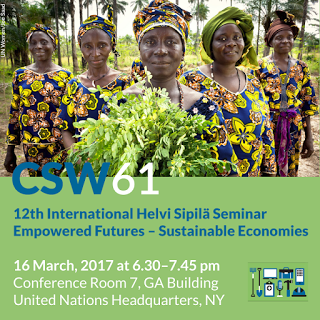 This entry was posted in Uncategorized and tagged Commission on the Status of Women, CSW 61, Finnish Federation of Graduate Women (FFGW), Marita Salo, United Nations.