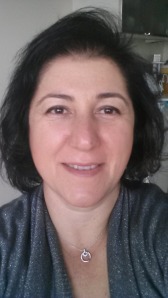 I was born in 1967 in Ankara ,the capital city of Turkey. I graduated from Middle East Technical University Faculty of Management in 1989.  The same year I started my banking career at the largest private bank of Turkey named İş Bankası as a training specialist. In 1993 I moved to  Istanbul and started to work in a middle sized and a very active bank.I became Retail Credits Manager in 1996. In 2004 the bank merged with  one of the largest government banks Halkbank ( Publicbank). I continued working at this position till my retirement in 2011 January. I am a  mother of 3 girls aged 17, 12, 4. My husband is an energy effiency consultant. I got to know about Turkish Association of University Women in 2012. My  neighbour   who was the General Secretary of previous management introduced me to the organization and I became the member of İstanbul branch and was elected at the ordinary general meeting held in April 2014.
I have observed  that TAUW is a prestigious NGO in the community and really active about it’s mission. Efforts has started to show the  results and the  government has decided to take legislative actions raising the penalties in cases of child brides and  violence against women. I feel happy about being a member of an effective organization and contacting with you.
Hoping to increase collaboration and reaching our targets.

This entry was posted in CER and tagged members.