As you may know, Nadia Savchenko,  an Ukrainian parliamentary, member of the Parliamentary Assembly of the Council of Europe is in jail in Federation of Russia since June 17, 2014, despite the parliamentary immunity.

She is accused of directing mortar fire that killed  two journalists. Her trial has been described as a farce by the EU and by the US envoy to the UN. Demonstrations in support of the 34 years old Nadia took place in some Ukrainian cities. On March 4, in protest against the proceedings of the Russian court, she announced a full hunger strike, refusing even liquids. 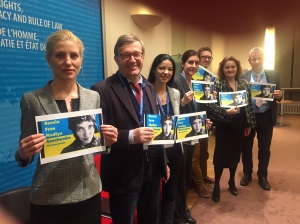 “Our ability to save her life will test the effectiveness of international diplomacy and our commitment to European values.”

This entry was posted in Uncategorized and tagged Anne Negre, gender expert INGOs CoE, online petition Nadia Savchenko, Parliamentary Commission of equality and non discrimination of the Parliamentary Assembly of the CoE.