The board is pleased to post the extended agenda for the Annual General Meeting on Sunday the 7th of September at the New National Library of Bucharest starting at 13.30 hours.  We now have added the balans and audition report. Due to holidays and late delivery of the report they were posted later. Our apologies.  The other material was posted end of June. Also we have two candidates for the two Vice Presidents Isabelle Trimaille and Elena Flavia Castagnino. https://uweboard.wordpress.com/wp-admin/post.php?post=1865&action=edit
Deadline for resolutions was 15 July; we received none. Deadline for candidates was 1 August. Invitations for the Meet and Greet or hosting an AGM are still welcome. Call for Hosting UWE 2015 and Meet and Greet

The morning of the third day of the conference (7 September)  is dedicated to sharing information and the reports of the NFA’s. Each NFA will have approx 15 minutes to tell the other members about their plans, activities and membership strategy.  So please prepare something to share and make the material available to be posted on the website. So check the latest agenda here. The links will lead you to the minutes, several calls among which the call for candidates.

– UWE action plan presentations mg working groups . the second day of the conference will be mostly dedicated to the topics of the draft action program which had four themes:  Women on Boards, Support Implementation Istanbul Convention,  Gender Sensitive parlements and Cooperation and Communication among women.

2. Minutes minutes Istanbul please send us your comments or language suggestions before so we don’t need to spend much time on the minutes.

6 Proposal Meet and Greet and next AGM:  Call for Hosting UWE 2015 and Meet and Greet: we have a proposal from Finland and from Germany inviting us. Also a tentative proposal from the Netherlands to host a meeting in The Haque.
Next AGM up till now no official invitations.
7. Orientation future UWE and IFUW:   The UWE board proposes to dedicate some time to come up with a common strategy on our policy towards IFUW and the future of UWE. Present during the Conference will be a staff member of IFUW and two boardmembers of IFUW. Elsbeth Navarinin and Catherine Bell the chair of the IFUW.

Central Question: How do the NFA’s view the relation between UWE and IFUW and could we develop a common strategy towards IFUW?

8. Proposal dues 2015: 0,46 cts per capita
We have the resolution of the Scottish NFA which was accepted in Helsinki for a per capita dues. For one year we had an amendment of The Finish and the Dutch association for 1 euro per head till a thousand members after that 0.25 cents per capita. The board did propose a budget last year in Istanbul but confusion arose partly due to shortness of time in Istanbul. For this reason we used the same fee 92014) as the last year (2013) which was accepted by the AGM in Istanbul. We now have calculated the budget for 2015 and and divide this per member (2014) . the per capita fee for 2015 is 0,46 cts per member. Our sincere apologies for the confusion. Budget 2015 and fee 2015 The balans is presented under the reports and contains a slight mistake which we will clarify during the AGM.

9. Result of the elections
10. Any other business.

Audition report finance: contrary to the decision of the AGM in Helsinki a auditor was used in 2012 (costing aprox. 1000 Euro of which the Finish association paid  400 euros)  and in 2013 the treasurer found her own financial committee as the AGM in Istanbul did not dedicate examiners) 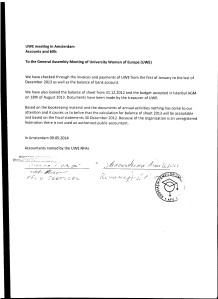 This entry was posted in actions, AGM 2014 Bucharest, CER, IFUW, Violence against women.

Please note the time for the reduction rate for the UWE Conference is extended to 20th of July!! UWE2014Bucharest-presentation-may 2014

And we have just posted the draft agenda with several calls:

Please share this information and don’t hesitate to contact the UWE Board if you have any questions or suggestions concerning the AGM on 7th of September via universitywomeneurope@gmail.com or skype edith.lommerse1

University of Women Europe “Meet and Greet” in Amsterdam, successful and inspiring!

A job well done team UWE! Excellent venue, brilliant setup and excellent execution of a successful UWE meet and greet in Amsterdam. Thoroughly enjoyed the full 4 days. Yes we went a day early to see what all the ‘background’ was about and I’m glad we did. Indeed it was  fantastic the warm welcome offered by Gerda with Edith,  Vera and Mary Josè 🙂 ElenaFlavia (Siracuse)

It is one of the many positive evaluations UWE received after two intensive days at the first UWE Meet and Greet in Amsterdam. Over 40 representatives of the branches of UWE from France, Romania, the Netherlands, Italy, Germany, Turkey, Finland, Switzerland, Ireland and  UK met for a two-day gathering aiming at exchanging information about joint actions at European level. Here an impression of the Meet and Greet.
It started with a welcoming reception hosted by the UWE president Edith Lommerse to celebrate Europe day as the UWE was founded with the specific purpose to encourage  European higher educated and university women to participate in the progressive development of European society. The “Meet and Greet” event was an opportunity to UWE members to get to know more about the work of the EWL and discuss possible collaboration in informal setting mixed with a social and cultural program.

EWL Acting Coordinator Pierrette Pape was invited to present the work of the EWL (see PPT presentation), while the  Vice-Presidents of UWE explained the possible ways for UWE to be engaged at EU and Council of Europe levels.

UWE  members warmly applauded the EWL video clip on the impact of austerity on women. It is a great clip to watch and  use on a screening evening with members to increase awareness of the effects of austerity policies currently undertaken at the EU and many countries in Europe. Research shows it is women who suffer the most of these  policies and that’s also why it is so important to vote and underwrite the manifesto for The European Parliament Elections.

Amongst the different issues of interest for the members of UWE, violence against women experienced by educated women is a concern which led UWE to decide to develop a two-year project in order to map and raise awareness on the scale of domestic violence faced by educated women in Europe. Some members also mentioned the situation of migrant skilled women. Contact person Uta Krope explained the approach which aims at learning together with an elaborate powerpoint which has lots of links to interesting information of the diverse approaches. Next learning conference is in Bucharest Romania from 5-8 June. More info see: U-DOMESTIC VIOLENCE MET BY EDUCATED WOMEN-1

After the presentations the group discussed themes for UWE to be proposed at the BUcharest Conference 5-7 september after a proposal from the UWE board four themes were seen as potentially good themes to put into practice for the UWE as a whole.

Along the four themes several working groups formed which will be presented in a different article. Besides in-depth discussion on the implementation of women’s rights, UWE members had the chance to do an architectural tour of the Eastern Docklands of Amsterdam, Dutch honorary member Angeline Joordens took care of two tours in the pouring rain as there were so many members interested. Thank you Angeline!

In the evening several local presidents came to meet the UWE representatives at the reception hosted by the Amsterdam Branch of the Dutch VVAO. President Rosy van der Vlies explained the importance of meeting and working together thanking UWE President Edith Lommerse for this opportunity to contribute:”I gladly volunteered after she twisted my arm”.  After a lively dinner where still more Dutch members appeared it was late when the day was ended with a warm applause for the organisation.

Next day a smaller group was instructed by Uta Krope on new ways of cooperating and disseminating information by Uta Krope. She showed several new and more practical ways of cooperating digitally and made it abundantly clear that emailing with attachments is old fashioned and not very effective.  She is always happy to assist and provided an interesting PP with useful tips and tricks. Uta Krope:”If you have seen the instruction once you will know what is is about and after three times watching a video instruction on Youtube ánd trying, you will be able to do it! ”  More info see web-2-introduction-amsterdam version for blog. Thank you Uta!

While the rain was pouring down the group went to the North of Holland to visit a Chrysanthemum farm Dekker which provides 30 percent of the Chrysanthemums of the world. Mister Erik Floris was so kind as to inform us extensively of the growing process and the different types of flowers.

Find another story on the Meet and Greet on the website of the EWL:  http://womenlobby.org/news/ewl-news/article/university-of-women-europe-meet?lang=en

Recently  a few Europe wide reports were published: violence against women, the gender gap report etcetera. They are also published on this site. The reports are clear, too many women suffer from violence and too many women get paid less than men. It is may be hard to believe when you yourself are not in such a position but it is important and worthwhile to join forces and show that women will not put up with violence and strive for better positions in society.

Still a lot has been done also on a European level and in these document you will find an overview of the European  efforts for Equality since 1957. Europe and equality 2012 Next week almost forty women from all over Europe will gather in Amsterdam to be introduced to the work of the European women’s Lobby and the Council of Europe in which the UWE has participative status. I am looking forward to great debates and meeting lovely and interesting women. Purpose of the discussions is to set new goals and priorities for UWE to be presented and reviewed at the AGM in Bucharest 4- 7 September 2014.  More news will follow shortly.

This entry was posted in AGM 2014 Bucharest, meeting 2014, Uncategorized, Violence against women.

The CER of Romania Tatiana Isoo presented the proposal of Romania to hold the UWE Conference 2014 in Bucharest at the UWE Meeting 2013 in Istanbul. Theme will be “European Quality Education for all”. Aim is to have the conference during three days 4- 7 sept  2014. The AGM gladly accepted the proposal.

To get inspired and know more about this interesting city? See the information and invitation on this YouTube movie. http://www.youtube.com/watch?v=4dlXzwU8hvw&feature=youtu.be

This entry was posted in AGM 2014 Bucharest, Uncategorized.